So start how you mean to continue…… oh gawd….

So yesterday I had 2 car rides, a train and a bus to get to Perth Airport to make my flight to Bali.

The train left without me having grabbed my bike box, so it was sweet talking, finger crossing, challenging waiting game which had me racing for time to make my flight.

I dissembled and packed up my bike on the train and then proceeded to push it along the streets of Perth, arriving on the bus a huffing, puffing, sweat mess.

I hid some gear in the bush around the Airport (I wonder if it will still be there when I arrive?) and made my flight.

I arrived in Bali to it pouring down with rain at night. I didn’t want to ride my bike in the rain – well more so, I needed to find a secret spot to stash my bike box, and having a wet bike box is not that ideal!)

So I slept in the airport on the hard ground.

Just having done a super heavy leg session the day before, just lying on the floor my gluts were suffering and sleep didn’t come easily

Also sleep isn’t that easy when you forget your ear plugs – those Airport PA announcements are disruptive for a reason right? and sleeping outside in 22 degrees when my sleeping bag is suitable for 10 degrees.

(I know it was going to be warm, but I’m planning on going into the Mountains ya see.) 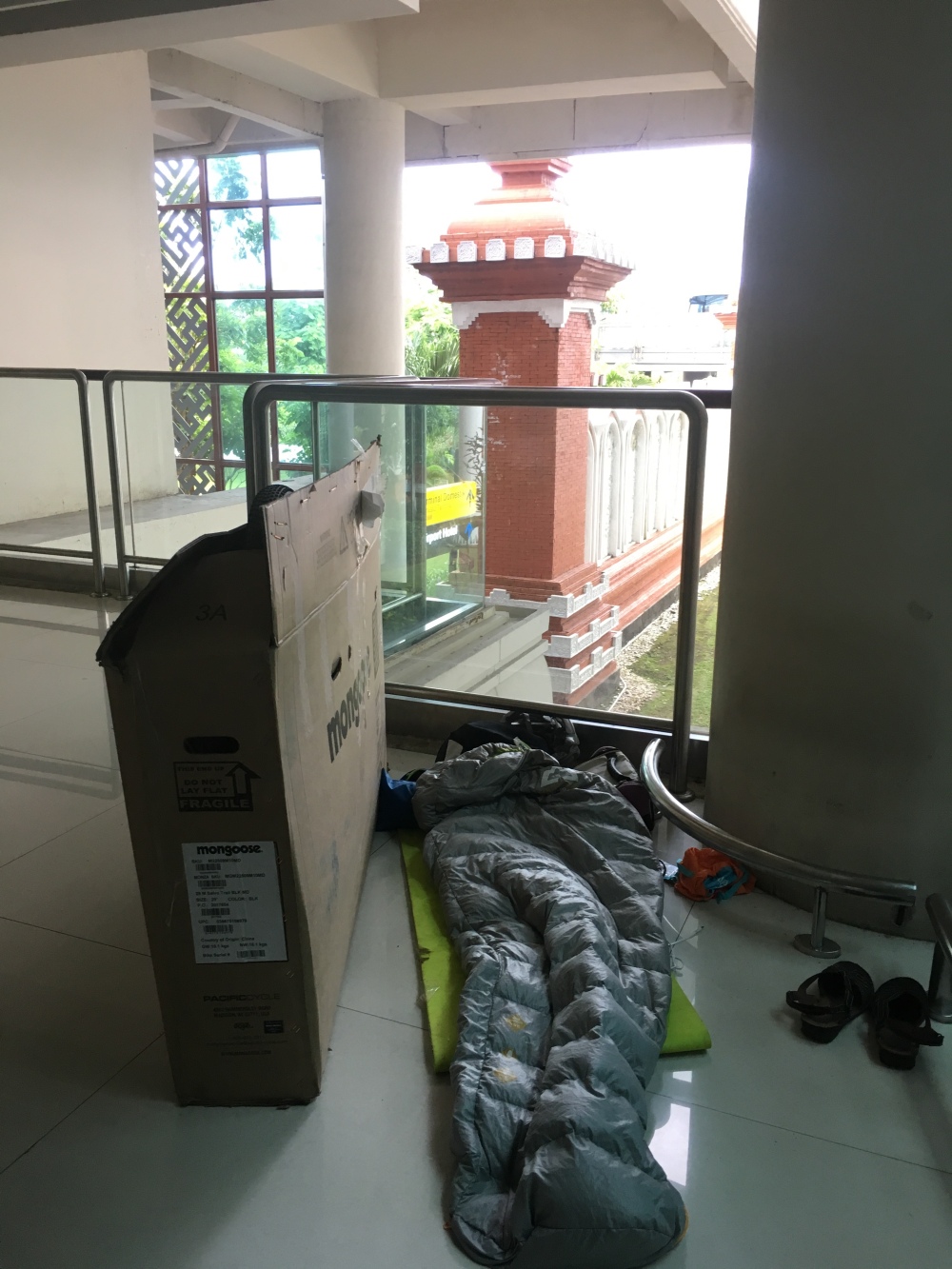 So I’m here in Bali and I’m about to get on my bike (find a secret stash for my bike box) and go explore!

I was planning to go South and check out the surfing spots for a night, knowing I had to cross the busy Tourist areas. But in the brief time I’ve had here interacting with the beautiful Balinese people, I’m now going to go in search of them and the real Bali, and hope I don’t see another Westerner (yes hopeful I know!)

So now, on ya bike girl!

Oh and I’ve managed to lose one screw to the bike….. and normally it’s good practice to put all the screws back on your bike as they’re there for a reason…… must have left it on the train. Whoops!

So turns out it’s really easy to get away from the swam of tourists in Bali and find the Indonesian/Balinese!

Learnt how tiny Foreign Exchange shops can have such attractive higher rates than official shops – I always wondered how they made money ….

I thought I was going mad having counted the money and then after recounting it 1/4 was gone. I was feeling embarrassed I was taking up this guys time and couldn’t get my head around it. When he told me to go elsewhere I caught him out and told him off after snatching back my money.

I then went to another money exchange and was straight away onto his tricks. He wanted to be the last one to touch the money and when I insisted he couldn’t have the money back after recounting it, he then told me he needed a big commission.

Sometime throughout this experience I’d found the elbow rest pads from my aero bars had been taken from my pannier bag.

I accidentally broke the zip so the pocket was undone. Why someone would take them I have no idea?

The funny thing was I was growling myself for having brought them (they were attached to my bike) as they were additional unwanted weight – and I don’t use them.

So the Universe heard me (the power of intention/law of attraction for ya!) and BOOM! No more rest pads for you Andrea!

So I got the hell out of the Tourist areas after I had a luke warm swim in the ocean swimming with my mouth open (I’m still healing my tooth abscess – but I wasn’t sure if what I was doing was a good thing or not?) and lying on the beach like I was pretending to be in the Dentist’s chair (my mouth open to get sunshine on it) – I know I would’ve looked funny!

And I rode as fast as I could (around 10km an hour in the crazy traffic which is NOT fast!) and it was abundantly clear many people don’t cycle tour around here.

I had so many Indonesian people riding alongside me on their Motorbikes, taking to me at the lights or pulling me over trying to chat with me. Not one person wasn’t shocked I was riding around the Island. The circumference is only around 500km but it felt like I’d told them I was riding to London! 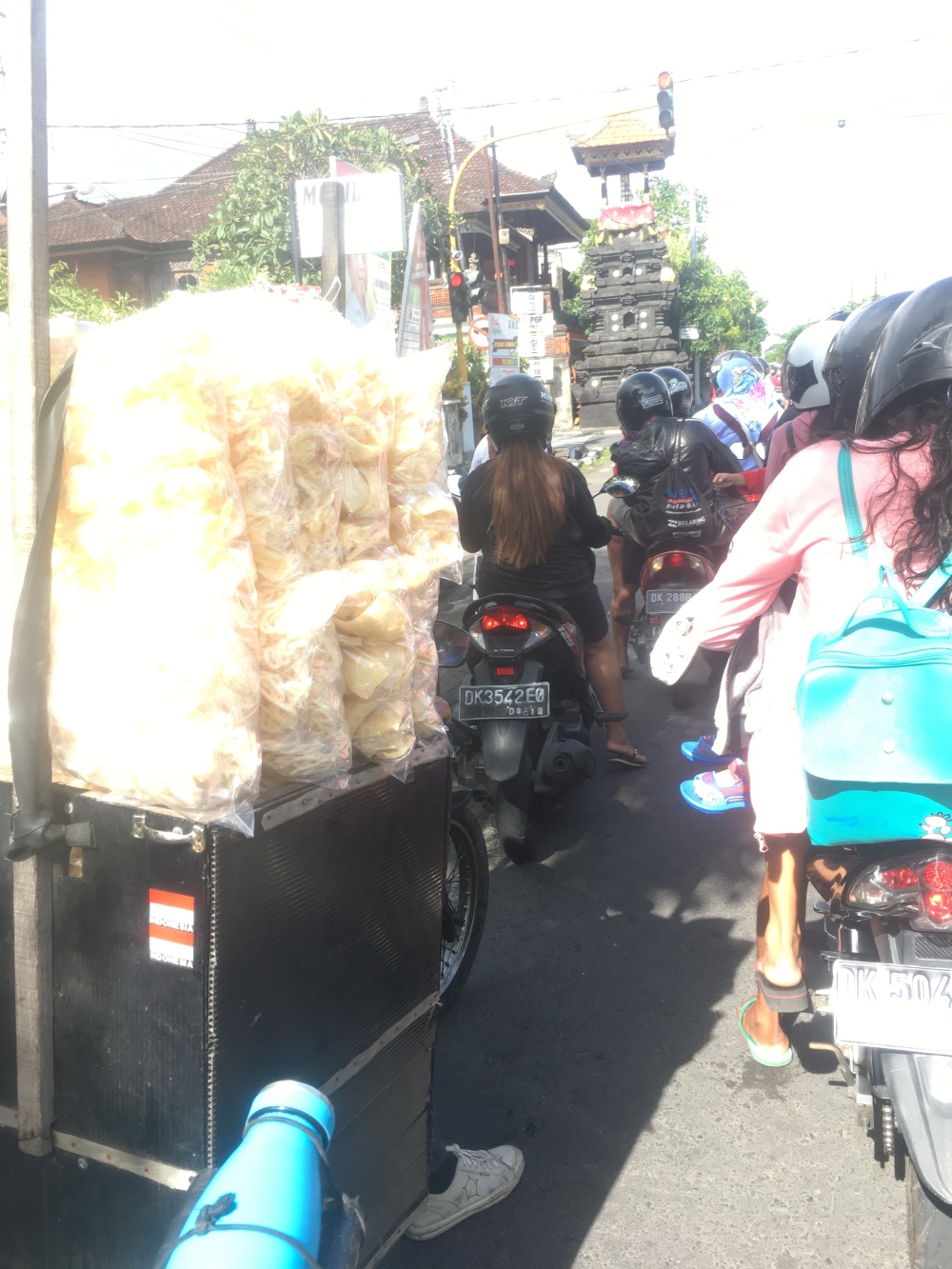 I love this aspect about exploring a country by bike – it helps people to see their World differently and open up possibilities for them. Had they even thought you could do such a thing?

Well now they see me doing it, they can start to imagine they could also too….or what else could they start doing that they previously thought they couldn’t?

I also LOVE cycling through crazy traffic, weaving in and out of cars and scooters, and them stopping or turning whenever they want, driving on the wrong side of the road and using their horn as constant communication – crazy traffic.

Does anyone else love this too?

I feel waaaaay safer in Asian countries riding my bike than in NZ or Australia!

I believe cycling through crazy traffic is like rock climbing , white water kayaking, technical mountain biking – or any other sport where you have to be completely present and aware and if not, then disaster may strike

I rode for nearly 5 hours and it only felt like 1.

So on my travels I met a 34 yr young Indonesian Woman who at the age of 24 decided to upturn her Muslim upbringing and religion and take off her veil, causing lots of family issues and losing many friends.

It was truly fascinating talking to her how she felt oppressed by her religion and rebelled against it. ( She now considers herself a Spiritual being.)

Also how she does not see her family as controlled or oppressed in any way by religion but as a wonderful means for them for hope, community, belonging, moral upstanding and acceptance.

Learning about someone’s life different from my own, is honestly why I love to travel so much.

People wonder if I get lonely travelling alone but it couldn’t be further from the truth!

I feel waaaaay more connected to others, feel like I belong and also get an immense contribution to others and my own personal growth as well as standing out and being different.

Being on a bike, as a solo Woman is such a huge conversation starter and low risk to others, and of course an environmentally friendly way (and ideal pace) to experience the World.

So guess where I’m sleeping tonight?

At my new Indonesian friend’s cosy home nestled in nature – which has the biggest organic passionfruit vine – with ripe heaving fruit! – I’ve ever seen in my life! Only 10km from Ubud (the supposed cultural Mecca of Bali.)

Gosh and wait until I tell you about my organic tea and (“no I don’t want to drink coffee thank you”) coffee experience which was amazing, and sad and shocking at the same time.

Bali is not what I expected and I’m loving it!!

Update after my night:

I forgot how the craziness continues all night (and early morning) long in Asia! Ear plugs are a must – double dam I forgot mine.

There was a wedding (which sounded like next door) that was beating drums until 12pm, and then the animals started up. Wowee they were loud!

Then at 5am ish the chanting and sounds from next door waking up began. I honestly think I got way more sleep on the concrete floor of the Airport with the PA system!

The funny thing was my lovely host for the night didn’t hear a thing and slept through it!

I certainly have become accustomed to the dead still night whilst living in the country.

I wonder what today will bring!