Skip to content
What is it about solo travel travel that I love so much?
Hopefully this might just communicate with you a little bit why I love to travel…..and what sort of things I get up to along the way….
A few days ago I rode into a small 800 person town called Pemberton in Western Australia. I cycled to their local ‘swimming pool’ a large dam made from a natural creek, nestled amongst huge silver trunked Karri trees. Being the only one there, it was peaceful and tranquil. I lay down on the grass in the sun, listening Hi to the birds and stared up at the trees.

It wasn’t long before I felt the presence of someone and sat up. There was a short man with a round belly, wearing a ripped sleeveless khaki shirt and bare feet, appearing to check on the pool. He had obviously cut himself on his leg, the blood had trickled down and dried.
He had a kind, soft face and was pleasantly friendly. He looked to be in his late 60’s.
“This place is just gorgeous!” I gushed.
I could feel him beam with pride.
We got talking and he told me the ages of the trees I was looking at were between 300-400 years old.
I was astonished.
I worked out he was the volunteer Caretaker. He had a sense of duty looking after something that had brought him so much joy in his younger years. He wanted others to also experience the same.
He was born in Pemberton and had lived there his whole life. His Wife died of Breast Cancer 25 years ago and he’d lived alone ever since.
I felt a sense of sadness emanating from his soul.
He later told me he and his Wife had decided to have children very early and then spend their lives in their 40’s and 50’s travelling and enjoying life.
However this never happened.
He spent the last 30 years working as the Gardener for the local School of about 120 children. He had loved his job and from what he told me, he particularly loved the interactions with the children the most. He would start work at 5:30am even in the middle of Winter in the dark. He was the type of Man you know would’ve poured all he had into his job. It appeared he had nothing else, his children lived away and never visited (although not out of malice, I later understood why.)
After getting the Pension he said he’d felt standing down from his Gardener job to allow the job to go to a family in need was the right thing to do. He now took it upon himself to look after the pool I was now looking at.
He showed me old pictures of the dam back in the 1940’s, 50’s and 60’s and talked to me about the trees and the surrounding National Parks. I was fascinated with his stories and tales and it seemed he loved sharing them with someone genuinely interested.
I asked him where would be the best place to pitch my tent, and under his breath he mumbled and pointed to an area inside the swimming pool. I was slightly expecting him to tell me to go to the Caravan Park. I smiled and winked at him that his suggestion was safe with me, I knew having him on my side all would be well.

The next morning I saw him at 7am checking on the area and later on as I sat outside the Visitors Centre planning out where my explorations would take me that day. I’d just cycled a few hours to another swimming spot and natural beauty outside of town. He was wearing the same clothes, his bare feet and still had the dried blood down his leg.
“What are you doing today?” he asked me.
“Do you fancy doing some sight seeing with me in my car?”
“Oh yes that would be lovely!” I exclaimed, and I had the Visitors Centre look after my bike as I hopped into his Ute, pushing documents and rubbish off the seat onto the floor.
The next hours were just amazing.
The sun was shining and the sky was completely clear and blue. The roads were quiet, beautiful and the places he took me to gorgeous and astonishing. This area had been his playground for the past nearly 68 years. He knew it well. Not only where to go but his knowledge and stories was by far better than any Tour guide I’d ever heard sprout off facts and fables. He shared with me his vast knowledge of the trees and plants (after telling him I was keenly interested in understanding and recognising medicinal and native plants) fires, wildlife, culture, the area, and just stories from his life. You could tell he was enjoying this just as much as me. 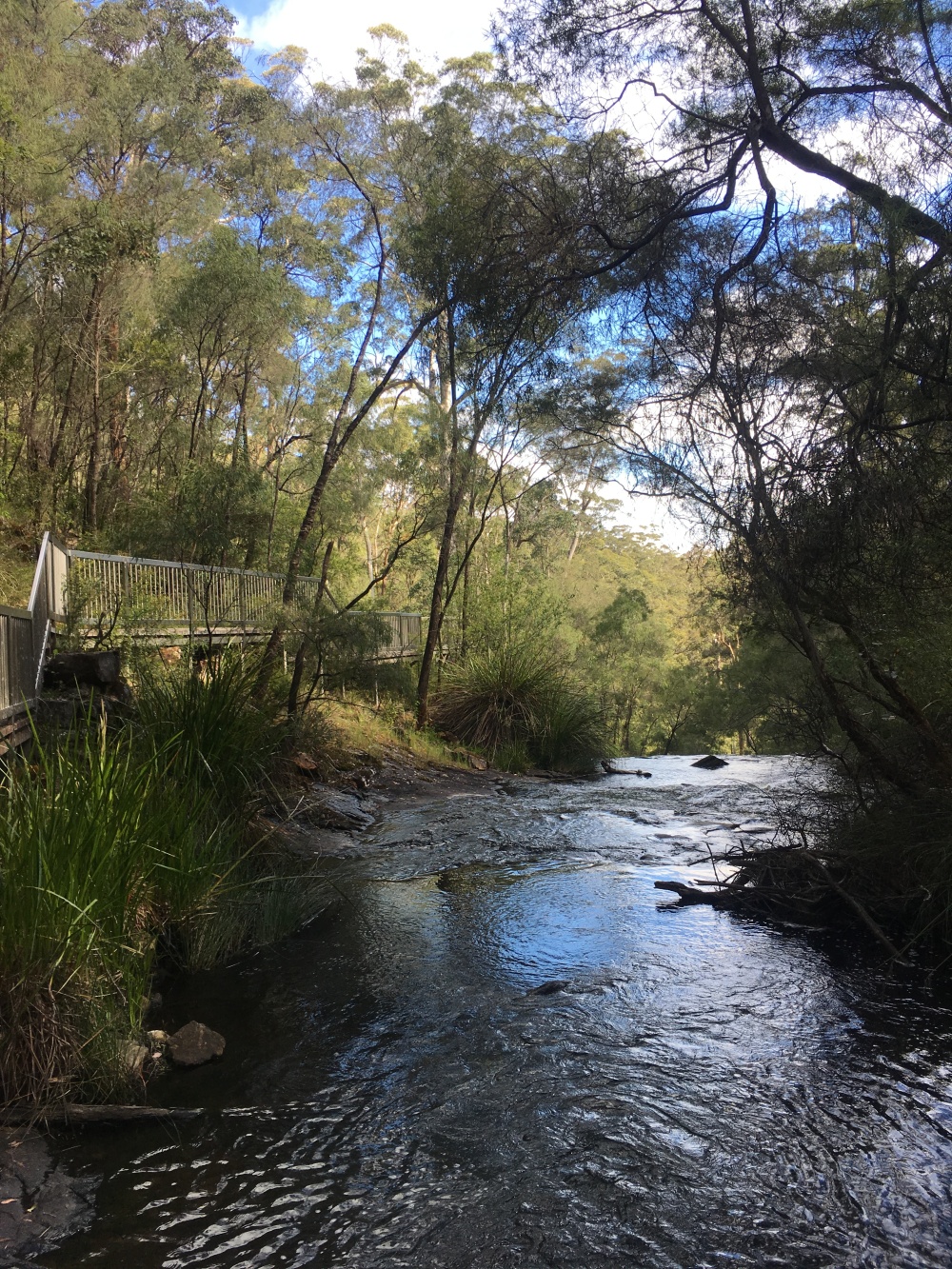 We visited a 63m Karri tree which I climbed up with no harness or ropes, pulling myself up from steel poles protruding from the outside of the tree. It was one of 3 trees used back in the days `to look out for fires. The view at the top open, vast and humbling.

We walked through Karri and Marri forests, walked over an old railway bridge, watched waterfalls and trickling streams. I chewed the leaves from Peppermint Eucalyptus trees and lathered my hands up using leaves from the Soap tree. He took me through areas annihilated by fires showing me the destruction and then the regeneration, and areas untouched by humans for 40-50 years. I visited a place not known on the Tourist map, a ‘local only’ destination, marvelled at a Goblin forest, the National Parks and State Forests, the local ‘beach and a Resort.

I had an incredible day. 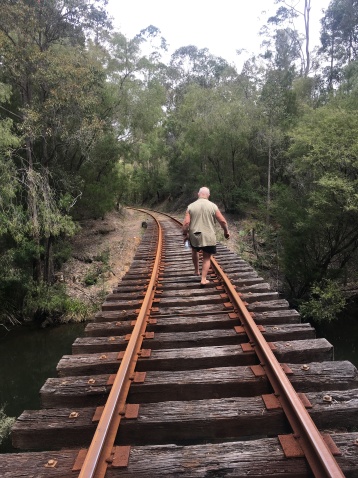 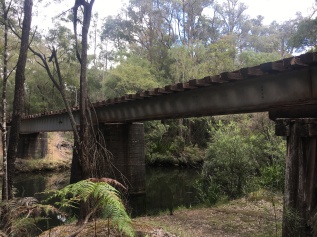 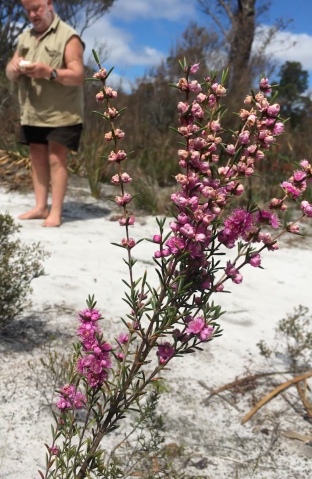 As he took me back to my bike at the Visitors Centre and a Coaching call, he asked if afterwards I’d like to go down to the coast.
“Oh yes I’d love that!” I exclaimed.
At 5pm he appeared now dressed in a clean, tidy shirt, street shoes, looking like he’d showered. He struggled with my heavy bike in the back of the Ute and we drove it up to his House.
The outside of his house resembled a dump.
Timber, and tools and towers of pre loved clutter and crap – a playground for days and days of tinkering and creating for a lonely, retired and restless old(er) Man. I could understand why his Daughters didn’t visit. I knew he wouldn’t invite me into the house, and was kinda glad he didn’t.
We drove 45 minutes to the South Coast towards the sunset, and stopped at a unassuming peak on the way. He told me to take off ahead, rather than walk slowly with him, and the closer I got to the top the beauty was astonishing. Standing at the top of the barron rock there were 360 degree views to the vast National Park below. It was truly breathtaking.

We visited the South Coast and stared down at the calm sea and watched the waves gently crash below. We walked around the track at the top of the cliff, staring out to sea, identifying plants and flowers, watching Eagles soar and Kangaroos fight and play. We were the only people out there. I was astonished at the beauty, the vastness and the serenity. 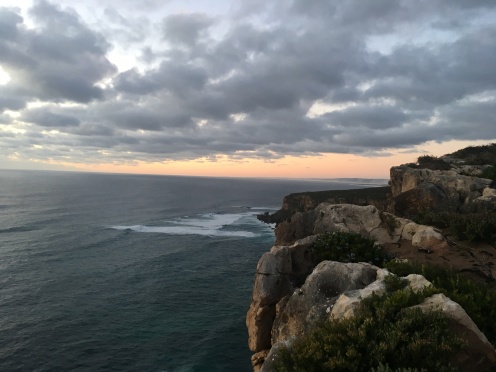 We spoke at length of the environment, preserving the beauty of the planet, the wildlife and their right as much as us to live in peace and harmony on the land. I introduced chat around Animal Agriculture as the number one cause of environmental destruction. He surprised me to his openness around it. Growing up on a farm, eating meat was what he knew, yet he told me he tries to eat meat once a week now.
I have come across this open and educated mindset many times through my travels in Western Australia. I have never found a coffee shop that didn’t have plant milks (mostly the same price as cow milk) decaf coffee and Vegan food items – even in tiny village single store cafes. Yet my travels through NZ, I’d been hit with the “Get a piece of steak in ya Love” attitude time and time again, plant milks queried with “What the hell do you do with that?!” and the feeling that having ‘Meatless Mondays’ was making a real sacrifice and doing it tough (very similar to opinions and attitudes in QLD I found.)
* of course there are always exceptions and differences in attitudes, but to generalise, this has been my experience.
Western Australia has surprised me with their progressiveness, openness to find out more and live more plant based and a real concern to support the environment. I have been pleasantly shocked.
On the way back home we dodged confused Kangaroos in the dusk light, and he told me how he was so glad he met me, how he’d had such a crap day and getting out today was just what he needed. He’d said many times he’d wondered what was the point anymore, but he once again realised today what an amazing place of the World he lived in. It brought a tear to my eye, as I had had such an amazing day, thoroughly enjoyed his company and felt blessed to be alive in such an incredible World.
I set my tent up on his front lawn and listened as the rain gently petter pattered me to sleep.
I have mostly done my solo travels though countries where English is not a first language (except in England) and these type of beautiful experiences for me are common. However being able to communicate freely and really understand a person, their life and their surroundings just makes travel experiences even more rewarding.
This is exactly one of the reasons why I love to travel so much – To see and truly experience how other people live and be immersed in their life, is one of the biggest joys and rewarding challenges travel can bring.
To think the night before I was camped up next to a quiet river, nestled deep in a valley away from civilisation and immersed among wildlife and the following day an older Man was opening up to me about his life and life experiences and took me sight seeing around his home town – two completely different experiences, but both experiences both incredibly rewarding and satisfying to the soul.